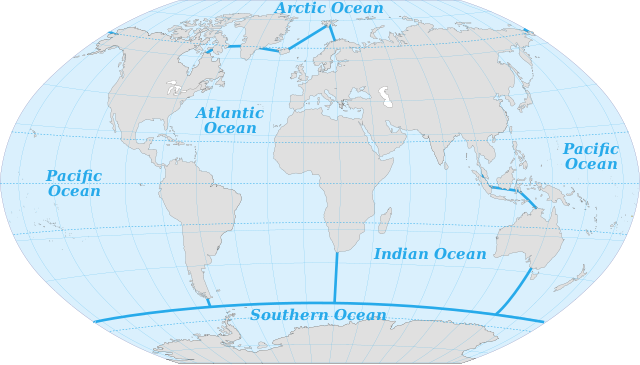 World map of the five-ocean model with approximate boundaries

The ocean (also the sea or the world ocean) is the body of salt water which covers approximately 71% of the surface of the Earth. It is also "any of the large bodies of water into which the great ocean is divided". These five oceans are, in descending order by area, the Pacific, Atlantic, Indian, Southern (Antarctic), and Arctic Oceans.

Saline seawater covers approximately and is customarily divided into several principal oceans and smaller seas, with the ocean as a whole covering approximately 71% of Earth's surface and 90% of the Earth's biosphere. The oceans contains 97% of Earth's water, and oceanographers have stated that less than 20% of the oceans have been mapped. The total volume is approximately 1.35 billion cubic kilometers (320 million cu mi) with an average depth of nearly .

As the world's ocean is the principal component of Earth's hydrosphere, it is integral to life, forms part of the carbon cycle, and influences climate and weather patterns. The ocean is the habitat of 230,000 known species, but because much of it is unexplored, the number of species in the ocean is much larger, possibly over two million. The origin of Earth's oceans is unknown; oceans are thought to have formed in the Hadean eon and may have been the cause for the emergence of life.

There are numerous environmental issues for oceans which include for example marine pollution, overfishing, ocean acidification and other effects of climate change on oceans.

Extraterrestrial oceans may be composed of water or other elements and compounds. The only confirmed large stable bodies of extraterrestrial surface liquids are the lakes of Titan, although there is evidence for oceans' existence elsewhere in the Solar System. 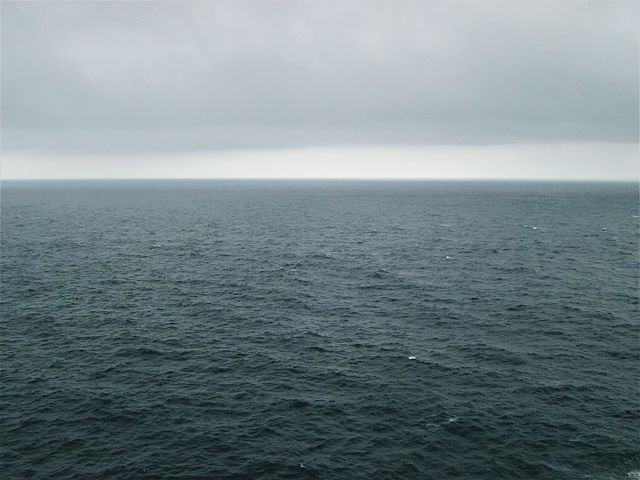 The Atlantic, one component of the system, makes up 23% of the "global ocean". 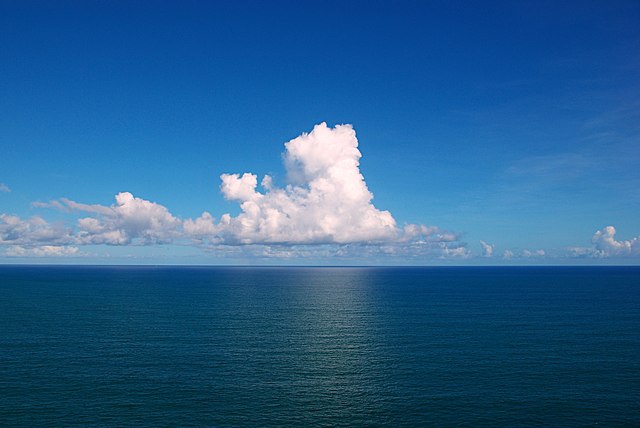 Surface view of the Atlantic Ocean

The phrases "the ocean" or "the sea" used without specification refer to the interconnected body of salt water covering the majority of the Earth's surface. it includes the Atlantic, Pacific, Indian, Southern and Arctic Oceans. As a general term, "the ocean" is mostly interchangeable with "the sea" in American English, but not in British English. Strictly speaking, a sea is a body of water (generally a division of the world ocean) partly or fully enclosed by land. The word "sea" can also be used for many specific, much smaller bodies of seawater, such as the North Sea or the Red Sea. There is no sharp distinction between seas and oceans, though generally seas are smaller, and are often partly (as marginal seas) or wholly (as inland seas) bordered by land.

The global, interconnected body of salt water is sometimes referred to as the "World Ocean" or global ocean. The concept of a continuous body of water with relatively free interchange among its parts is of fundamental importance to oceanography. The contemporary concept of the World Ocean was coined in the early 20th century by the Russian oceanographer Yuly Shokalsky to refer to the continuous ocean that covers and encircles most of Earth. Plate tectonics, post-glacial rebound, and sea level rise continually change the coastline and structure of the world ocean. That said a global ocean has existed in one form or another on Earth for eons.

The word ocean comes from the figure in classical antiquity, Oceanus (; ?keanůs, ), the elder of the Titans in classical Greek mythology, believed by the ancient Greeks and Romans to be the divine personification of an enormous river encircling the world.

The concept of ?keanůs has an Indo-European connection. Greek ?keanůs has been compared to the Vedic epithet ?-?Šy?na-, predicated of the dragon V?tra-, who captured the cows/rivers. Related to this notion, the Okeanos is represented with a dragon-tail on some early Greek vases.

The major oceanic divisions ? listed below in descending order of area and volume ? are defined in part by the continents, various archipelagos, and other criteria.

Oceans average nearly four kilometers in depth and are fringed with coastlines that run for 360,000 kilometres.

Oceans are fringed by smaller, adjoining bodies of water such as, seas, gulfs, bays, bights, and straits.

The total mass of the hydrosphere is about 1.4 quintillion tonnes ( long tons or short tons), which is about 0.023% of Earth's total mass. Less than 3% is freshwater; the rest is saltwater, almost all of which is in the ocean. The area of the World Ocean is about 361.9 million square kilometers (139.7 million square miles), which covers about 70.9% of Earth's surface, and its volume is approximately 1.335 billion cubic kilometers (320.3 million cubic miles). This can be thought of as a cube of water with an edge length of . Its average depth is about , and its maximum depth is at the Mariana Trench. Nearly half of the world's marine waters are over deep. The vast expanses of deep ocean (anything below ) cover about 66% of Earth's surface. This does not include seas not connected to the World Ocean, such as the Caspian Sea.

The bluish ocean color is a composite of several contributing agents. Prominent contributors include dissolved organic matter and chlorophyll. Mariners and other seafarers have reported that the ocean often emits a visible glow which extends for miles at night. In 2005, scientists announced that for the first time, they had obtained photographic evidence of this glow. It is most likely caused by bioluminescence.

The major oceanic zones, based on depth and biophysical conditions

Oceanographers divide the ocean into different vertical zones defined by physical and biological conditions. The pelagic zone includes all open ocean regions, and can be divided into further regions categorized by depth and light abundance. The photic zone includes the oceans from the surface to a depth of 200†m; it is the region where photosynthesis can occur and is, therefore, the most biodiverse. Because plants require photosynthesis, life found deeper than the photic zone must either rely on material sinking from above (see marine snow) or find another energy source. Hydrothermal vents are the primary source of energy in what is known as the aphotic zone (depths exceeding 200†m). The pelagic part of the photic zone is known as the epipelagic.

The pelagic part of the aphotic zone can be further divided into vertical regions according to temperature. The mesopelagic is the uppermost region. Its lowermost boundary is at a thermocline of , which, in the tropics generally lies at . Next is the bathypelagic lying between , typically between and , lying along the top of the abyssal plain is the abyssopelagic, whose lower boundary lies at about . The last zone includes the deep oceanic trench, and is known as the hadalpelagic. This lies between and is the deepest oceanic zone.

In contrast, the littoral zone covers the region between low and high tide and represents the transitional area between marine and terrestrial conditions. It is also known as the intertidal zone because it is the area where tide level affects the conditions of the region.

The halocline often coincides with the thermocline, and the combination produces a pronounced pycnocline.

The deepest point in the ocean is the Mariana Trench, located in the Pacific Ocean near the Northern Mariana Islands. Its maximum depth has been estimated to be (plus or minus 11 meters; see the Mariana Trench article for discussion of the various estimates of the maximum depth.) The British naval vessel Challenger II surveyed the trench in 1951 and named the deepest part of the trench the "Challenger Deep". In 1960, the Trieste successfully reached the bottom of the trench, manned by a crew of two men. 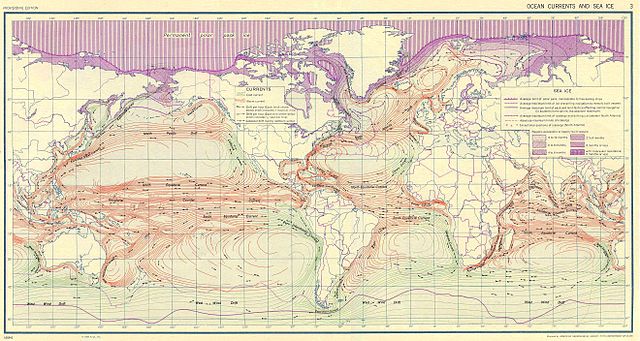 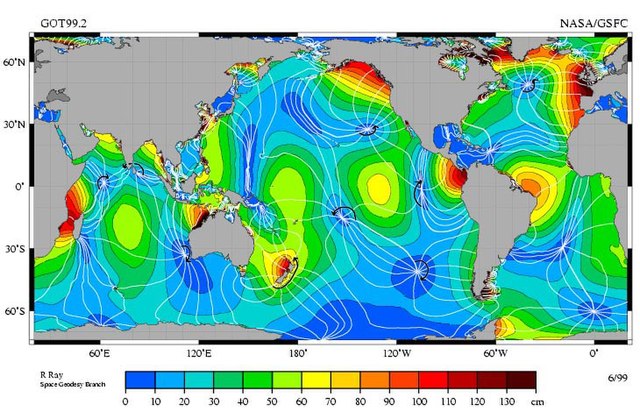 Amphidromic points showing the direction of tides per incrementation periods along with resonating directions of wavelength movements.

Oceanic maritime currents have different origins. Tidal currents are in phase with the tide, hence are quasiperiodic; they may form various knots in certain places, most notably around headlands. Non-periodic currents have for origin the waves, wind and different densities.

The wind and waves create surface currents (designated as ?drift currents?). These currents can decompose in one quasi-permanent current (which varies within the hourly scale) and one movement of Stokes drift under the effect of rapid waves movement (at the echelon of a couple of seconds).). The quasi-permanent current is accelerated by the breaking of waves, and in a lesser governing effect, by the friction of the wind on the surface.

This acceleration of the current takes place in the direction of waves and dominant wind. Accordingly, when the sea depth increases, the rotation of the earth changes the direction of currents in proportion with the increase of depth, while friction lowers their speed. At a certain sea depth, the current changes direction and is seen inverted in the opposite direction with current speed becoming null: known as the Ekman spiral. The influence of these currents is mainly experienced at the mixed layer of the ocean surface, often from 400 to 800 meters of maximum depth. These currents can considerably alter, change and are dependent on the various yearly seasons. If the mixed layer is less thick (10 to 20 meters), the quasi-permanent current at the surface adopts an extreme oblique direction in relation to the direction of the wind, becoming virtually homogeneous, until the Thermocline.

In the deep however, maritime currents are caused by the temperature gradients and the salinity between water density masses.

In littoral zones, breaking waves are so intense and the depth measurement so low, that maritime currents reach often 1 to 2 knots. 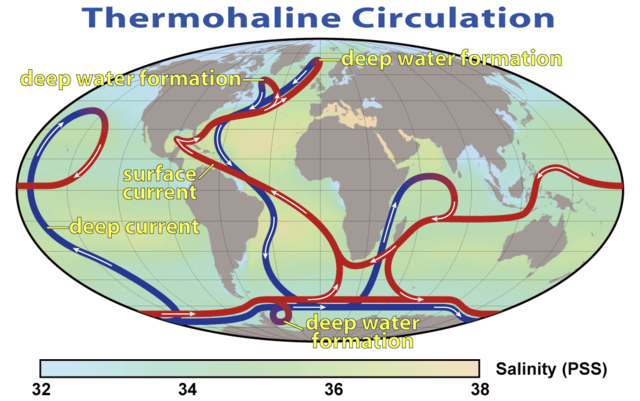 One of the most dramatic forms of weather occurs over the oceans: tropical cyclones (also called "typhoons" and "hurricanes" depending upon where the system forms).

Oceans have a significant effect on the biosphere. Oceanic evaporation, as a phase of the water cycle, is the source of most rainfall, and ocean temperatures determine climate and wind patterns that affect life on land. Life within the ocean evolved 3 billion years prior to life on land. Both the depth and the distance from shore strongly influence the biodiversity of the plants and animals present in each region.

As it is thought that life evolved in the ocean, the diversity of life is immense, including:

A zone of rapid salinity increase with depth is called a halocline. The temperature of maximum density of seawater decreases as its salt content increases. Freezing temperature of water decreases with salinity, and boiling temperature of water increases with salinity. Typical seawater freezes at around ?2†įC at atmospheric pressure. If precipitation exceeds evaporation, as is the case in polar and temperate regions, salinity will be lower. If evaporation exceeds precipitation, as is the case in tropical regions, salinity will be higher. Thus, oceanic waters in polar regions have lower salinity content than oceanic waters in temperate and tropical regions.

Salinity can be calculated using the chlorinity, which is a measure of the total mass of halogen ions (includes fluorine, chlorine, bromine, and iodine) in seawater. By international agreement, the following formula is used to determine salinity:

Human uses of the oceans

Many of the world's goods are moved by ship between the world's seaports. Oceans are also the major supply source for the fishing industry. Some of the major harvests are shrimp, fish, crabs, and lobster.

Human activities affect marine life and marine habitats through overfishing, habitat loss, the introduction of invasive species, ocean pollution, ocean acidification and ocean warming. These impact marine ecosystems and food webs and may result in consequences as yet unrecognized for the biodiversity and continuation of marine life forms.

Other effects of climate change on oceans

Although Earth is the only known planet with large stable bodies of liquid water on its surface and the only one in the Solar System, other celestial bodies are thought to have large oceans. In June 2020, NASA scientists reported that it is likely that exoplanets with oceans may be common in the Milky Way galaxy, based on mathematical modeling studies.